This week we welcome Paul Sokolovsky as our PyDev of the Week! Paul is the creator of Pycopy, which is described as “a minimalist and memory-efficient Python implementation for constrained systems, microcontrollers, and just everything”. You can check out more of his contributions to open source on Github. Let’s take a few moments to get to know Paul better! 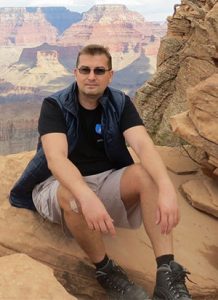 I have Computer Science as my first masters, and later got another masters in Linguistics – when I was a CS student I was interested in Natural Language Processing subfield of AI, and wanted to get a formal degree to work in that areas, perhaps in academia, but that never panned out, I got sucked up into the IT industry, a common story ;-).

Hobbies – well, nothing special, I like to travel, and even if a plane carries me far away, I like to get on my feet and explore like humans did it for millennia. Though if there’s a motorbike for rent, I like to ride it to a more distant mountain before climbing it. My latest interest is history. Like, everyone took history lessons in school and might have their “favorite” history of a particular country at particular timeframe, but trying to grasp history of mankind across the mentioned millennia is a different matter.

Oh, as many students, at that age I drooled over Lisp and Scheme programming languages. I did a few projects in them, and while they were definitely great and I could grok them, it occurred to me that I wasn’t not sure about the rest of world. Programming is inherently social activity. And besides the power of those languages, their drawbacks were also evident, and while I was able to surmount them, other people might be not just unable, but even unwilling to do that.

So, I started my quest of the best-in-compromise programming languages, sifting thru dozens of both mainstream and obscure languages of that time. I stopped when I found Python. I think of it as “Lisp for real world”. Those were the times of Python 1.5.1…

Based on the above, it shouldn’t come as surprise that Python is my favorite languages. I know a bunch of scripting languages – Perl, PHP, Java, JavaScript, Lisp, Scheme, and more “systemish” ones like C and C++. I definitely watch the space and keep an eye on Go, Rust which approaching upstream and niche contenders like Nim, Zig, whatever. I don’t rush into using them – again, I passed that stage of language-hopping when I was a student.

Thanks for doing the interview, Paul!

The rest of the post PyDev of the Week: Paul Sokolovsky appeared first on The Mouse Vs. The Python.

from The Mouse Vs. The Python https://ift.tt/2SdPLe0